If you’ve followed me for any amount of time, you undoubtedly will have seen my favorite singing exercise.

What I’m talking about of course, is the “Nay Nay Nay” exercise.

This is an exercise where you use the word “Nay” and sing on a scale that takes you through different parts in your vocal range.

The first thing you’ll recognise when you hear the exercise is it is quite ugly sounding!

And you have to make some pretty weird faces to use it as well! 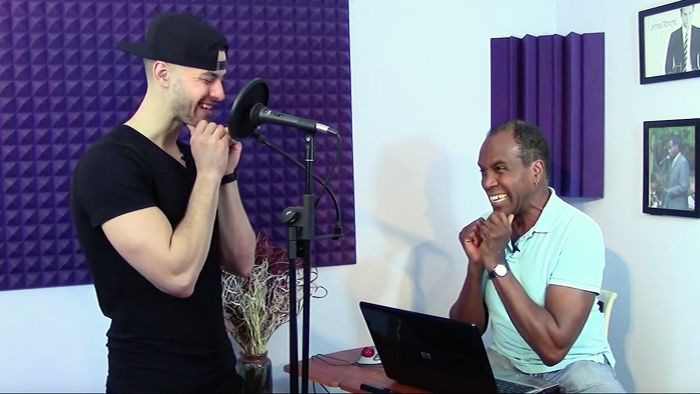 The funny faces helps to position your sound correctly as you are doing the Nay Nay singing exercise.

Here’s Why I Love It So Much

Almost every singer I ever encounter in my vocal studio falls into the same trap. And that trap is not using their voice in the way it was designed.

More specifically, just about every singer uses their swallowing muscles in the singing process.

The problem here is these muscles are there to help you to eat food, not sing!

Also, most singers will have bad vocal positioning. By this I mean, their sound tends to fall back in their throats, instead of stay above the cheeks and in the mask.

And thirdly, it’s very common for singers to “push up” and strain to get their high notes.

Here’s The Beautiful Thing About The Nay Nay Singing Exercise

The reason the Nay Nay Nay exercise is beloved by me is it addresses ALL of these problems at the same time!

It helps you to correct your positioning. And it allows you to become aware of the role your swallowing muscles are playing, which allows you to relax them. And it can also help you to “release” into your higher notes, which takes the strain off of your voice.

If A Singer Has Developed Bad Habits

If a singer walks into my vocal studio and I can see they’ve developed some bad habits, my first inclination is to use the Nay Nay Nay exercise to start reversing things.

Simply put, if you were to practice this exercise 15 minutes a day, over the long term you will experience a LOT of improvement in your vocal technique.

Let’s Give The Exercise A Go!

Ok, so let’s look at how this singing exercise is done. If you click play on the video below you will see my demonstration (the video will begin at the correct time for the demonstration).

As you can see, I’m using my thumbs under my jaw to have the awareness of what my swallowing muscles are doing. Every time I feel them tighten, I make a conscious effort to shift my sound slightly so they relax again.

Let’s do a bit of the exercise. You can use the video below to follow along.

Now, if you’ve been singing with some bad habits for a while, it’s important to realize that it will take some time for these things to reverse.

If your sound has been falling back into your throat… and if you’ve been used to “pushing up” for your high notes… and if you’re voice often cracks and falls apart… it just means that we need to use some little tricks to begin to reverse things.

My first “go to” trick is to use what I call “reverse thinking”.

What this means is that when you go up for your high notes, instead of pushing up, think to yourself that you are pulling these notes down.

It’s quite counter intuitive and it can feel strange at first, but once you get used to it you’ll be able to release into your high notes with no strain or tension.

It will also smooth over your voice in between vocal registers so you’ll have no cracking or falling apart as you sing higher.

Watch me demonstrate this by clicking play on the video below:

“Let Go” First, Then Sing Down Into The Notes

Another thing to add to this idea of “singing down” is that before you sing the note, have the mental idea that you are “letting go” or “releasing”.

So just before you sing the high note, “let go” and “sing down” into the note.

These concepts, while a little tricky in the beginning are real keys to singing in your higher vocal registers without pushing your voice.

Now that I’ve explained the concept to Brendan, let’s see what he can do.

You’ll be impressed at how high in his range he gets after these subtle tweaks to his approach!

Sing along too if you want to keep working at the singing exercise on your own voice!

Here's the audio file used in the video that you can use to practice with:

Trust Will Build Over Time

One thing you’ll notice is that when Brendan got into the really high parts of his range he began to fall back into old habits and started to push his voice.

This is because he hasn’t quite built up the trust that his voice can get there easily.

It seems logical that to get the hard notes you have to work hard. But it's really not the case.

And it's a big reason why most singers push to get their high notes.

So it takes a bit of time to build up this new muscle memory where you can soar up to amazing high notes without much effort. Once this muscle memory builds up, it’s followed by a level of trust in your voice.

This is a great place to get to because from here you will never be tempted to try and force your voice at any point.

Brendan began to feel more freedom in his voice after using the Nay Nay exercise.

As I said in the beginning, this Nay Nay Nay singing exercise is a really good one. It helps you to reverse old, bad habits. And daily practice of it is one of the best things you can do for your singing.

So be sure to learn the exercise by watching the demonstrations on this page. And then incorporate it into your practice schedule. If you tire of using the scale, you can even take songs that you’re working on and substitute the word “Nay” for the lyrics.

Good luck with it and keep singing!