One of the most common questions that we get at Singing Success is some version of this:

If you've ever wondered that, you'll want to read this 'vocal tips' issue.

Here's the short answer: Head voice and falsetto are not the same, but so many people (including MANY vocal teachers) think they are the same that the terms have become confused and are commonly used interchangably. BUT THEY SHOULDN'T BE.

The easiest way to understand the difference of course is to simply HEAR examples of both. Clear head voice doesn't sound like falsetto.

But since I can't sing in this email to show you the difference, you'll need to go to Brett's free online lesson (which is an excerpt from his 'Brett Manning Live!' DVD) to hear with your own ears.

This issue will deal with what happens physically to make these two very different vocal sounds.

What's In A Name?

Falsetto means literally 'false voice.' To identify whether the sound you are making is falsetto or not, listen for a very 'airy' sound. If up high, your tone changes from firm and clear to airy, that's falsetto.

Here's a video that demonstrates falsetto and some of it's uses.

The reason falsetto has an airy tone is because of how it's produced by the vocal cords. In falsetto, the tiny vocal folds are coming close enough to one another to cause the edges to vibrate as the air flows between them, but they are not making contact with one another.

The airy sound comes from all the air that escapes through the space left between the cords.

**If you have Brett's program, in the workbook, you can actually see photos of Brett's vocal cords doing these different vocal coordinations.

You'll notice a tiny space between the cords when he's doing his falsetto voice. But with head voice something completely different happens.

To understand what Head Voice is, we first must look at another voice.

A singer's normal speaking voice, when sustained in a single note is referred to as 'chest voice.' Put your hand on your chest and say the word 'at.'

You'll feel the vibration in the chest. So 'chest voice' is a reference to the dominant resonance cavity -in this case, the chest.

Here's a video that demonstrates chest voice in action.

In Chest Voice the vocal cords come together with a good firm seal and vibrate along their entire length as the air flows between them. This is the lower part of your vocal range.

As the singer climbs into higher notes, the cords begin to tighten (like a guitar string when you turn the tuner peg). At some point, the cords reach a crisis-- they can only stretch so tight before they risk damage.

If the singer tries to keep this chest voice going ever higher, the cords will preserve themselves by suddenly breaking apart, dumping the extreme tension, and producing the next higher note via 'falsetto.'

Since vocal cords are made of muscle, they can do
things a guitar string could never do

In this case, in addition to breaking apart to relieve the pressure from the lungs, they actually change their thickness (they thin themselves out--the equivalent to changing to a thinner guitar string in middle of a song to reach a higher note!)

The problem is that the tone goes from firm and rich (chest voice) to something thin and airy and light (falsetto) in the space of only one note. This is fine as a sound effect, but it is the cause of much frustration for singers everywhere. We all wish we could just reach one or two notes higher with that rich, firm chesty tone! But alas.

But there is great news! There are simple exercises that can cause the singer to release the tension and NOT go into falsetto in these higher notes.

A singer can eventually 'FADE' from chest voice into a firm upper range called 'head voice.' 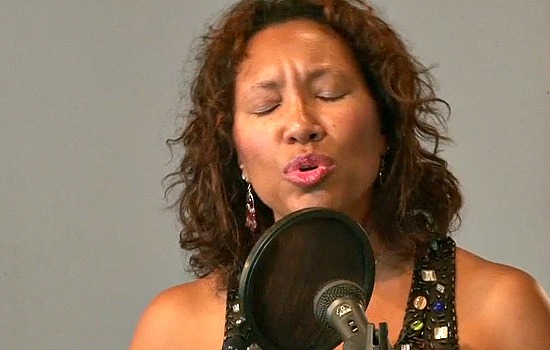 The term 'head voice' refers to the fact that on higher notes, the tone begins to resonate more in the small spaces of the head (nasal and sinus cavities).

Here's a video that demonstrates head voice and how you can use it.

We'll talk more about the effect of resonance on tone in later issues of 'vocal tips,' but for now, let's talk about what the cords are doing.

They are doing something VERY different between falsetto and head voice.

In head voice, the cords remain in contact with one another. This makes a huge difference in tone between falsetto and head voice. The head voice sounds clear and 'clean' without the excess 'airy' sound, because there is no escaping excess air.

In the male singer, the chest voice 'crisis point' is around the notes E, F, F-sharp, or G above middle C. In the female, it's at A-flat, A, B-flat, or B above middle C. (Incidentally, the female FIRST crisis point is the male SECOND crisis point). If the singer has learned how to 'FADE' into the next register (head voice), there will be no breaking apart of the cords for self-preservation. They do something wonderful---

They first thin out (like falsetto) but they stay together as they thin.

Eventually, up toward the very highest notes, they not only thin out, they partially 'ZIP UP' like a guitar string being 'fretted.' This all has the effect of keeping the tone clear (because the cords stay in good contact with one another) AND, more importantly, the cords are not required to tense ever tighter to reach higher notes!

The cords are designed to close themselves off on higher notes so that they don't have to be stretched to the point of injury to reach those notes.

Head voice is a beautiful, clear sound, rather than the airy falsetto sound.

The best news of all is that there are exercises that can teach a singer to MIX chest voice with head voice as the singer goes higher. And they are NOT difficult exercises at all!

Eventually, a listener will hear a singer go from chest through a 'mixed' area into a pure head voice and it will sound like ONE HUGE SINGLE VOICE!

By huge, I mean huge-sounding because it will be rich in tone, like chest voice. But I also mean huge in range!

I personally have nearly a 4 octave range. Brett has a consistent 5 octave range and on certain days has over 6 octaves with no 'breaks!'

Most of his students grow to 4 octaves and more!

Many people are skeptical when they hear this, because the normal experience of most singers is about an octave and a half before they MUST either stop going higher or break into falsetto.

Seeing is believing. So I dare you to watch.

If you don't have the full SINGING SUCCESS program but you want to check out this method, then I suggest that you get the BRETT MANNING LIVE! DVD.

In it, you'll watch Brett take an entire audience through a first lesson and increase their range on the spot. You can do the exercises, get the results, and see for yourself.

I hope you never stop singing.