Answer: In the music industry, a producer is the person whose job it is to use the available funds to get the best recording possible on a particular project.

He or she knows what personnel to hire, how to schedule, how things are supposed to sound, which studio to rent, how to make the singer feel and sound like a million bucks, how to keep everybody motivated until the project is finally finished and mixed, and a thousand other jobs...

As a producer, there are 2 big categories of "jobs": 1) Making the track (background music) sound great, and 2) Getting the absolute best performance out of the singer(s). In this article I'll deal more with job #2.

Unlike computers, pre-amps, mixing boards, etc., singers are NOT machines. They require special handling, because they are complicated (and often sensitive). They are human. They are US!

Since I am a singer myself, I can usually "get inside a singer's head" fairly easily. Most of the time, great vocals must be "coaxed" out of a singer, especially if they have not spent a lot of time in the studio before they come to me.

It usually helps me to think of the studio as a giant camera. I must get the "camera" ready, then get the singer to do their thing better than they've ever done it before...in a totally "sterile" environment. I then must capture what happens. It can be a great challenge for singer and producer alike.

I say "sterile" because usually, in the studio, there is no audience...you sing to a cold metal tube and some blinking lights. Then there are the headphones, which offer their own set of problems for the singer.

In this environment I must get the singer to literally go beyond their present possibilities. OF COURSE I must get them to sing in tune and in time. But that is just the foundation.

It's everything that gets built from there that I must usually coax out of them. So, what must be built upon this foundation of singing in tune and in time?

Your Best Secret Weapon of ENERGY 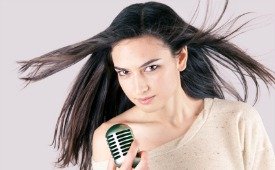 Energy is such a vague word, so I'll try to explain. The sense of power you get from a singer cannot possibly come from just loudness. Once a singer is captured along with the musical background, it will all get "mixed" to about the same loudness as every other CD.

And in any case, the mixing engineer finally decides how "loud" a singer will be compared to the background track.

So I, as the producer, must pull out of the singer a sense of "power" that comes from the voice itself beyond reference to mere loudness. But HOW?

Believe it or not, it's simpler than you might think. THIS IS PROBABLY MY MOST VALUABLE SECRET (MY VERY BEST SECRET WEAPON). When I get the singer to do this one thing, the energy level of their vocal performance can increase by 90%!

What is the one thing?

I get them to chew.

Not on steak or chicken, but chew on their words. What do I mean?

Practically, this means that they end up SLIGHTLY over pronouncing their words. I call it "chewing" on their words, because if they are doing it right, their face looks like it's more involved in the singing than before...like they are chewing on a piece of taffy.

Here's how I get them to do it.

1) "Mean it"--I get them to think about what they are singing and I ask them to really "mean" what they are singing. I use a physical object to help them understand. I bring them into the control room. I grab a pen and say "Here, take this pen." and then I recklessly toss the pen toward their hands. They fumble with the pen and maybe they catch it.

I then say "That's how you are singing this song right now. You are throwing your lyrics out there and maybe your audience will catch them or maybe not. You don't sound like your life depends upon them catching your lyrics..."

Then I get the pen and I say again, "Here, take this pen." I then let them hold out their hand and I very deliberately and carefully place the pen in their hand and say, "I want you to present this lyric to your audience like I just gave you this pen...I want you to sing this song like it's VERY important to you that not a word be missed by your listeners."

I explain that if they are thinking this way, it will help them sound like they mean what they are singing. The audience will be COMPELLED to believe them.

I explain that if they are thinking this way, it will help them sound like they mean what they are singing. The audience will be COMPELLED to believe them.

2) "Crowded Restaurant"--I then have them imagine that they are in a crowded restaurant and that they've said something important to the person across from them. The person has paused, leaned forward and said "I'm sorry...what?" Then they repeat the same words, but they say them more clearly. Then the other person pauses again, looks confused, and says "What?" Then I say to the singer, "I want you to sing this song like you'd speak on the third attempt in that restaurant."

I illustrated by over-pronouncing. I say "watch my face." And they notice that my WHOLE FACE is being called upon to help me make the words.

3) "This Feels Ridiculous"--This is normally where I explain that they will (and should) feel slightly ridiculous if they do this right. But I also explain that the resulting vocal performance will be charged with all this seemingly impossible energy and intentionality.

4) "Stay Conversational"--Sometimes the singer will then over pronounce to the point that individual words are sung in a way that they would never say them. (For instance, they might start pronouncing the "g" at the end of the word "bring" with an audible "guh," rather than the "ng" as one sound.) I have to get them to back off of those individual words to sound conversational again.

5) "Consonants"--I will also have them look at the actual waveform of their voice on certain of their words, recorded on my computer. They will normally be shaped like a jagged-edged football. The beginning of the word will be skinny, then get fatter in the middle, then get skinny at the end. It's like they "fade" into the word, then "fade" away again. It comes across as timid and small.

I tell them I want to see the word looking more like a box. Start each word with strong energy and don't give up singing the word until it's done. If there is a consonant at the end, sing that consonant with as much intensity as the vowel that came before it. "End the word on purpose," I say.

Brett Manning likes to say "Classical singers sing from vowel to vowel, but pop singers should sing from consonant to consonant."

If they do what I tell them (and I usually hold them hostage until they do), after they sing again, they come back into the control room and listen to the "before and after" of the same song and they are blown away. Their energy level has just exploded!

They NEVER sing the same again.

A side benefit to all this is that when mixing the song later, the engineer doesn't have to place their vocal out so far in front of the mix in order to hear the words. Their energy stands up to the energy of the rest of the band. They seem a little larger than life and best of all, they sound like they have conviction. They mean it.

WHAT ABOUT "LIVE! IN CONCERT"?

Eventually a singer will pick up this way of over-pronouncing as a habit. That's exactly what should happen.

Just think about how much this helps in a live show, especially if you have a band. The live show is the most challenging situation, sound-wise, for both singer and audience alike. There is every distraction, like colorful lights, loud guitars and flailing drummers, and (often) a poor PA system, to discourage a good connection between singer and audience.

If the singer is "chewing" on his words properly, then his personality "grows" larger than life and he projects himself out to where the audience is sitting. And again, that sense of "conviction" compels the audience to lend their attention fully.

The next time you sing, try this and let me know what you experience.